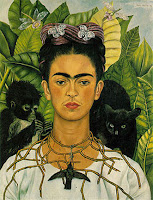 Does it seem as if the entire world is fascinated with Frida Kahlo? I know I snugly fit in that group. (Dunitz & Company retails designs inspired by her fashion savvy.) This weekend, I began to ponder about why she garners so much attention and curiosity.  It seems there is a lot of good reason for it. First off, when I think "Mexican Art", the first thing that pops up in my head are all the self-portraits Kahlo created. If this is your experience too, you're not alone. After inserting the words "Mexican Art" into my browser, stories and photos of Frida Kahlo were the first to populate. We live in a selfie era. And Frida Kahlo got started long before any of us.  She was her own best publicist. It's been reported that of 143 paintings produced by Kahlo, 55 are self portraits.Wow! 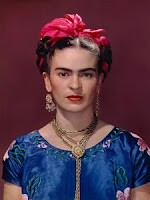 Obviously Frida Kahlo's work was greatly inspired by her life experiences. Much of her life was riddled with pain. She survived a bout with polio as a child leaving her with a limp. She survived a bus accident in her late teens which resulted in many surgeries. She fell in love with, married, divorced and remarried artist, Diego Rivera whom was 31 years her senior. There's was a tumultuous relationship, which yes, lead to more pain. Frida, a most colorful character, according to reports didn't dwell in her pain. She lived. She was openly bisexual and was known to have had affairs even when she was married. Her sexual relationships included those with Josephine Baker, Isamu Noguchi and perhaps most notable, Leon Trotsky. Frida's life is fascinating. She was a feminist, a communist and a fashion plate. No wonder Salma Hayek made a movie about her. 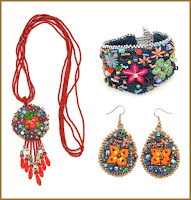 Much of my fascination with Kahlo revolves around her dress and the fashion choices she made. As you know, I work in Guatemala where the local Mayan women primarily wear beautiful and traditional dress.  But, to me, that's what they look like. Local women outfited in traditional dress. Somehow, Kahlo wearing flowers in her hair, traditional Tehuana clothing and big earrings transformed her into a super star. She was magnificent whether she was in the pueblo, Mexico City, Detroit (where she lived for a time with Diego Rivera) or New York.  No wonder she is viewed as a fashion icon and inspires the collections of so many designers. Heck, she has inspired me. This current season Dunitz & Company introduced and named necklaces, bracelets, earrings and brooches for Kahlo. These latest styles are embroidered and beaded on recycled denim. I'm certain if she were living today, she'd be sporting them with any number of her flouncy skirted outfits. What do you think? Are you fascinated by Frida Kahlo? - ND