Diego Rivera Reminds Us - Fair Trade is Not Charity 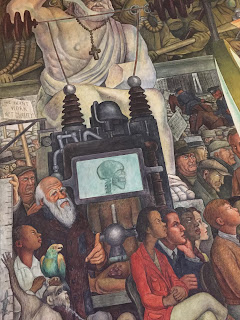 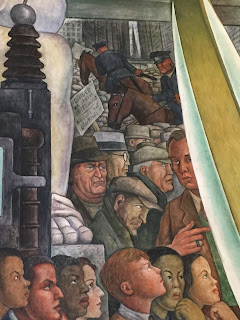 On a recent mini-vacation to Mexico City I visited the Palacio de Bellas Artes. This fantastic theater is also well known for its colossal murals on the second and third floors.  I was particularly drawn to one created by Diego Rivera in 1934 and wondered why much of the signage depicted in this masterpiece entitled "Man, Controller of the Universe" was in English. And then I learned the story behind the images. This grand scale painting was originally commissioned (even larger in size) by Nelson Rockefeller for yes, Rockefeller Center.  Diego began painting the mural, then known as "Man at the Crossroads" in New York in 1933 and it included images of Lenin and the Soviet May Day parade. When asked to remove these parts of the mural, Diego Rivera refused. Rockefeller paid the artist for his work and then had the partially completed mural destroyed and painted over. It was only then that Diego Rivera took his plans and re-created this masterpiece in Mexico City.

One of the main themes dictated for the creation of the mural was "looking for hope for a better world."  The timing of this is an interesting one since the mural was created after the Crash of '29 and before World War II. There are plenty of references to scientific discoveries. What I honed in on was the disparity between rich and poor people represented. Their are rich society women playing cards. And right next to them is a worker with a sign "We Want Work, Not Charity."  Other signs seen state "We Want Bread, We Are Hungry" and "Divided We Starve, Together We Eat." There are police officers attempting to keep marching crowds in order. Leon Trotsky is also part of the mural with his red flag "Workers of the World Unite." Everyone is looking for a fair shake. 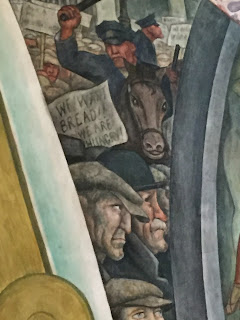 The desperate times depicted in this mural, in the scheme of a life, weren't that long ago. Much less than 100 years ago, our brothers were starving and looking for work and fair wages. We've all read about this part of American history. Many of our parents and grandparents lived this tale. And so I wonder, when we experienced this way of life in what really is recent times, so many of my country mates turn their back on supporting fair trade and following the golden rule.  Life is not better for us or the world when we try to buy goods at the cheapest price without considering how and where they were made. This clearly was our story in the 1930s. Did we not learn anything at all from our own difficult times? What do you think?

If you do visit Mexico City - you MUST put a visit to this mural masterpiece on your to-do list! -ND