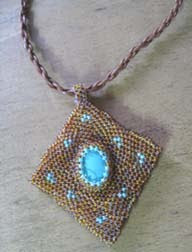 It's been a hectic few days since returning from Guatemala on Sunday. I've hardly had a moment to reflect on my trip. We've been busy getting orders out.... & there was the fire scare noted in my last blog.
Wow. We really focused on a whole bunch of designs for the Spring 2010 season. At first, it seemed like the energy wasn't flowing. And then, the waterfall. I think I'll be showing almost 40 new designs in the Dunitz booth this January! Don't miss that. 40 new designs along with all of our old favorites in 12 new color combinations. It's almost impossible to decide which is my favorite. Previewing in this blog is a new pendant design -- featured here in the color combination I let leak last month. This is one I know I'll wear often. ND
Posted by Nancy D. at 3:22 PM

The Fire was Over Before it Started

I'd say there was a bit more excitement at the office today then any of us would like. We were experiencing strange power surges over a couple of minutes. My thought was to go power down the computers. Bang Bang, ring, ring. A neighbor was shouting there was a fire on the roof of the building. I was at the front of the office where I could easily grab my dog and purse and run out the building. I could see some sparks, smoke and a small flame. With the Santa Ana winds today, we're quite lucky the flame didn't jump. An ambulance that just happened to be across the street called 911. I also called 911. I also banged on my landlords door downstairs to get him out of his residence. It seemed that the engines took forever to arrive. The winds were blowing the low limbs of an over grown tree over the power lines where they connect to the house. The firemen cut the lines. Other than that, there doesn't appear to be any damage. I'm so thankful. The only casualty are my reading glasses that fell off in the excitement and were smashed by the fire truck. Who knows when DWP will show up to run new wires. So, for now Dunitz & Company has no power. We're slaves to electricity. Forced vacation. I'm now home --- and what I am doing? -- not vacationing LOL. I'm writing this blog. This has NOT been my day. I also received a jury summons for December..... ND
Posted by Nancy D. at 1:47 PM

Wholesale Shopping in the Windy City

I’ve been thinking about the upcoming Chicago Gift Show. (Note: Dunitz will be in the Beckman Handcrafted section in booth #8-8088.) Word has it that the number of temporary exhibits will be growing significantly this season. It is no secret that all of the major wholesale gift shows have been shrinking…..shrinking lots and lots. In the past few years all the shows have been creating more aisles, wider aisles and buyer lounges to make the shows appear as if this was not the case. Buyers are complaining because they have less merchandise to choose from. Obviously with higher booth fees and a slumping economy, exhibitors haven’t been able to make ends meet.

Kudos to the Merchandise Mart team. They slashed their booth fees for 2010 to encourage show growth. They’ve been successful. Instead of exhibitors departing, they’re signing up. I’ve been told that as of today, about 15% more exhibitors have committed to the show. The sales staff expects this to jump to 25% - 30% before the doors open. Get the word out there. What a great opportunity for buyers. They’ll have more choices to choose from. Tell all – come to the Midwest and check out what the Chicago Market has to offer. No more fake corners.

For those of you that believe in buying “Fair Trade”, the Beckman Handcrafted section will have at least 16 exhibitor that belong to the Fair Trade Federation. Yes, Dunitz is among them. Last season there were only 4 or 5 of us. This is just another reason to shop this market. See you there. ND
Posted by Nancy D. at 3:57 PM

Thinking Out Loud about a Taboo Topic

Dunitz & Company doesn’t currently sell retail. We exclusively wholesale. However, we have considered and are considering having an on-line retail presence. Up until now, we haven’t done it because we thought it annoyed many retailers. We are regularly asked by retailers (at wholesale trade shows) if we retail. These stores have made it clear that they do not want to purchase from wholesalers that also retail. It seems almost impossible to get feedback from other wholesalers that retail. Why is this? They must know something I don’t – because so many are doing it.

I understand that most wholesalers that retail sell to the public at prices comparable to what retailers charge – so as not to compete with the stores that carry their line. I have heard the argument that most people like to touch and feel (in our case jewelry) the accessories they buy and prefer to shop at brick & mortar outlets. However, if a wholesaler doesn’t sell to stores in NE or SC, customers from these states would have options for buying.

I’m wondering how wholesalers that retail balance this without alienating the retail stores that carry their line. How many retail under their ‘wholesale company’ name with one website? How many have a retail site that goes by a different name? I’ve notice that many wholesalers known to me have websites that are clearly “retail” with their wholesale sections playing second fiddle. Hmmmmmmm.

I look forward to comments, suggestions and observations. ND
Posted by Nancy D. at 11:08 AM