For years, I've been friends with Bonnie Stauch, costumer extraordinaire. When you live in Hollywood, CA, you're bound to hang out with people that work in the industry. (Yup, I did too - during my early years after college.) Many years ago, Bonnie created wardrobe for what seemed like 100s of Hallmark movies. More recently she's dressed Bruce Willis.  Lucky me, she has used Dunitz & Company designs in several shows. Mel Harris (think Thirty-Something) wore our amulet pouch in one movie and I actually had a press shot of her showing it off. I have scoured my home and office for that image. Unfortunately I put it in such a safe place, I cannot find it. When I'm feeling insecure about what dress to purchase for this event or that event, Bonnie allows me to drag her shopping. Now that's a friend! If you're professionally dressing actors all day long, every day, I'm sure the last thing you want to do is go shopping with your girlfriends. 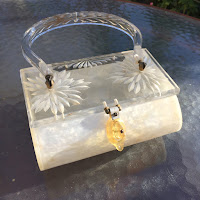 So, here's the thing. For Bonnie's birthday, I wanted to create a gift she'd appreciate - but was not way over the top. Truth is, none of us need anything. So, something imaginative and thoughtful is always the prize. If you don't already know this about me, I love a good flea market. Hunting the steal is my fun. You can only imagine how stoked I was to find this vintage Lucite (fancy name for plastic) 'Original Rialto NY' handbag. It's not in perfect condition, but it sure is pretty. I knew I'd never carry it.  I knew Bonnie would never carry it. I also know that either of us would love staring at it.  So, the question became, what should I do with it? 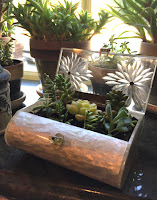 Do you think she'll love it? I've given it a trial run in my kitchen window box. So, here's food for thought for you. Just about anything can make a cool planter. A rusty coffee can. Old boots. A humorous coffee mug. Get creative. Succulents are absolutely impossible to kill. They hardly ever need watering. If you do so sparingly, you won't need to have holes in the bottom of your creative pot. So, grab some dirt. Snatch up some cuttings from your yard (if you can) or pick up a few small plants at your nearest nursery. Easy. You'll have your next creative gift in no time flat. Who will receive one from you? (And by the way, she LOVED it!) - ND

What is 'Fair Trade' and how can I possibly explain the ABC's of it all easily? 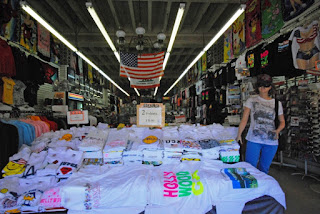 Let's start with my backyard, Hollywood Blvd., a big tourist draw. The old Grauman's Chinese theater is surrounded by souvenir shops selling T-shirts for only a few dollars. Seriously, $3.50 for a shirt? We all love a bargain. But, you must wonder how is it even possible for these items to be priced so low. Don't turn a blind eye. Such low priced items on store shelves absolutely means they were produced by exploited people in developing countries. Unfortunately a huge percentage of the world's work force labors very long hours for very low pay.

According to the World Bank, the global poverty line was raised in 2015 to $1.90/day. In 2012, 900 million people lived below this. Can you imagine living on less than $700/year?  It's even more shocking when you look at what percentage of people live on less than $1 or $2/day in various countries around the world.  I was shocked to learn in a recent report published by the World Bank that 45% of people in Nicaragua live on less than $1/day.  If you take the time to digest these stats your stomach will curdle and you'll surely make an effort to change your buying habits. 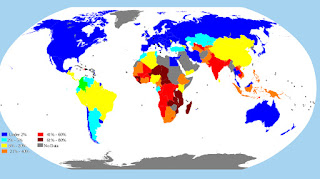 Not convinced yet? Check out this map of the world. Those countries in blue suffer little poverty as a percentage of their populations. Red or orange, the situation is bleak. Even in the areas shown in yellow, up to 20% of their inhabitants live in poverty. That's less than $1.90/day. I am not an economist or am I prepared to research and write a dissertation on poverty levels around the world. However, I certainly believe in advocating for fair trade and decent treatment of people around our globe.  Simply put, 'Fair Trade' is about giving all people who produce things we consume a fair price for their labor. Workers should earn enough money to live without malnutrition and with the ability to educate their children. Everyone should live with dignity.

This next paragraph was written by Chris Woodford a British science writer. There's no way I could write about this topic better than him. (I made a few small edits.) 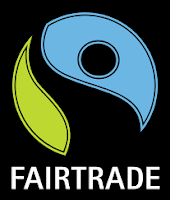 "Fair trade is a system that starts from the premise that workers lives have a value; this social benefit is partially what you pay for when you buy something. Fair trade doesn't just mean farmers and producers receive more money so they can support their families in the short term-though that's vitally important.  It also means they work under long-term contracts (and relationships) so their communities have enough security to invest in improvements both in their businesses and their societies. Fair trade producers are often part of small cooperatives of workers. Cooperatives use no child or forced labor, use organic and environmentally sustainable methods, and most often have high standards for animal welfare.  Typically, fair trade producers sign up for some sort of labeling system that guarantees things have been made under good conditions." (Examples of this are World Fair Trade Organization, Fair Trade Federation and Fair Trade Certified.) 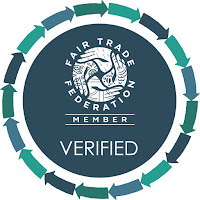 Here's my plug for Dunitz & Company! You know I had to do it! Dunitz is a proud member of Fair Trade Federation and we live according to the group's defined nine principles. Read them and you will have in greater detail a better understanding of our views on worker rights, environmental sustainability, empowerment of women and trade justice. FTF members are diligently screened to verify that they adhere to these principles. Dunitz is also a gold-certified Green America business. (Truth be told, once you pass your screening at Fair Trade Federation, Green America provides reciprocity. No need to be screened again. That doesn't hold in the other direction.)

So how do you explain "Fair Trade" to a total beginner, someone who wants to do good but doesn't want to hear a long lecture? I absolutely loved a recent blog post written by Sarah Culler, our FTF colleague at Fair Trade Winds. She tackled this issue so simply and perfectly. Here are the easy to share tips she suggests.

1. Fair trade means that farmers and artisans earn a fair, living wage for their work and are guaranteed safe working conditions.


2. There are certifications, similar to the organic label, for things like coffee, chocolate, produce and some clothing.

3. For items such as jewelry, cards, mugs and handcrafted pieces, there isn't a certification. But these types of products are made by organizations that are part of the Fair Trade Federation and World Fair Trade Organization. Members have been screened and verified and that's how we know they're fair trade.

4. Fair trade is NOT charity. It provides opportunity for artisans to break the cycle of poverty.

5. YOU can be part of fair trade by thinking twice about many of your purchases. And now that you have a better understanding, spread the word. 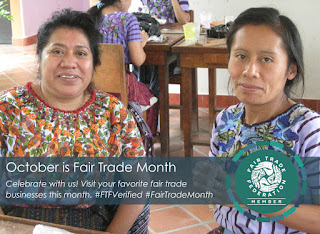 It's Fair Trade Month. Let's all make an effort (and when I type, I'm speaking to myself as well) to tell people why everyone should purchase fair trade items and make a greater effort to purchase fair trade.  As consumers, we can help break the cycle of poverty for so many that suffer around the world. It's easy to do. Are you in? -ND