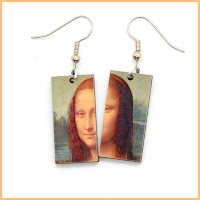 What is the most famous painting in the world? OK, there might be a few. And many of them have been around for quite some time and their likeness is available in public domain. If an artist has been looking down from the heavens above for over 100 years, we know it's OK to use their works...in our work. So as it is, Dunitz & Company has launched a new laser cut fair trade jewelry collection this season. I actually test marketed my concept at the recent Museum Store Association meeting in Washington DC.  And the feedback was quite encouraging.  Mona Lisa was smiling. 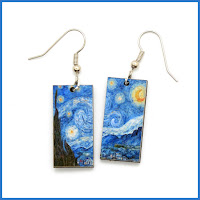 The most famous painting? It might be Mona Lisa.  But it sure seems Van Gogh's Starry Night will give that girl a run for her money.  Just sayin'.  And I was thrilled that the museum shop buyers loved the way I split many famous images for left ear and right ear views. 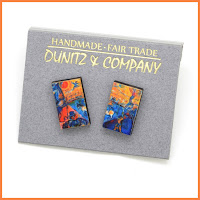 For years, it has seemed as if  sales of our beaded studs and fused glass studs cover our office rent. We're always packing these little things by the dozens and dozens. Punch line. I decided these famous images in art should also be offered as stud earrings.  Would you wear these?  Does this image ring a bell with you? The Circus Horse by Marc Chagall. I'm almost certain my aunt gifted me the book, "Marc Chagall Life and Work", when I turned 11 or 12. That book must weigh 12 pounds. I still have it. 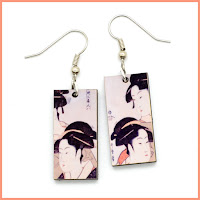 Not into European art? Our debut also includes images from famous Japanese artists.  Kitagawa Utamaro is one of my favorites. I fell in love with his work while studying Ukiyo-e wood block prints in a senior seminar at the University of Michigan. Did you know I majored in History of Art? #goblue (Had to do that!) Would you wear Three Beauties on your earlobes?


We've already had several conversations with museum shop buyers and a few gift stores about creating earrings with custom images. And we're all about that! That's exactly what I had hoped for when launching this line.  In some cases, these designs will be exclusive to the institution commissioning them. Others, we will make available to everyone.  Some museums have paintings where they own the rights. Without their collaboration, we could not use their images.  What are some of the images we've been asked to offer in our fair trade jewelry collection? Stay tuned for the Virgin of Guadalupe, ancient textiles and...even fingerprints! -ND
Posted by Nancy D. at 9:52 AM

When My Dog was the Best Model

I recently had a prospective customer, a museum buyer ask me if Dunitz & Company could produce "rainbow" jewelry. He thinks our fair trade beaded jewelry may be perfect for a LGBTQ show his museum will be hosting next year.  I smiled and said of course.  I was reminded that once upon a time, our mascot, and my first dog, Byron was our best and perfect model.  In the mid-90's we offered rainbow jewelry. And we sold a lot of it.

I left my job in Corporate America in 1989 and never looked back.  I was young and stupid and hopped on a plane to Guatemala in search of beautiful handicrafts.  I didn't know this exquisite country was in the midst of a civil war.  (OH...the stories I could share from that time.) While there I met the first women (one American, one German) who taught Mayan women how to create beadwork. Yes, we were on the ground floor. We had no competition. And the retailers 'ate up' everything we created and showed them. It didn't matter that our prime model was a Vizsla/Weimaraner. 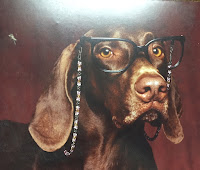 The buyers would have so much fun in the Dunitz & Company booth. And the portraits of Byron always stirred up great conversation about our beloved pets. I mean, seriously. Who could not laugh about a dog wearing glasses?

I have a few of Byron's portraits are on display in the office. They're propped up on the file cabinets. Unfortunately a couple of fallen behind the cabinets. This means I won't see them again until we move from 2142 N. Cahuenga Blvd., or figure out a way to go paperless and rid ourselves of customer files. My guess is neither will happen anytime soon. This choker, which we still sell on Shop Dunitz is ladled with Swarovski crystals.  Gosh, I'm certain we sold one recently. Unfortunately with high material costs, this design is no longer viable for our wholesale markets. 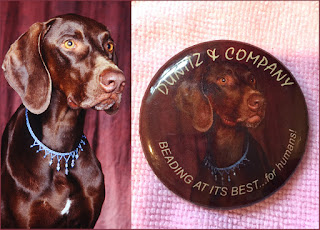 I used a photo similar to this one to create promotional buttons.  I'm guessing the printed portrait of that image is behind the file cabinets. (If you look closely, you'll see this photograph does not match the button exactly.) "BEADING AT ITS BEST...for humans".  Yes, I was silly. But, Byron and I had so much fun together. He was so spunky and full of energy. Did I saw he was a Vizsla crossed with a Weimaraner?

Gosh. Even his paws got in the act. Several images even landed in the press.  Gifts & Dec. Giftware News. Even, Dog Fancy! Many years later, I actually offered a line of high-end dog collars. (They were made in India.) Pantone color expert, Leatrice Eiseman discovered us at a show and asked if she could use Byron's portrait (wearing one of  our dog collars) in her book, The Color Answer Book.  Yes, he's now featured in one of her publications for all of eternity.

I used to tell Byron, "I love you forever and for all of time."  I'm so thankful to that museum buyer who reminded me of that sweet sweet dog wearing rainbow jewelry.  Byron was an excellent model for Dunitz & Company fair trade jewelry. And even better, he was the best face washer! -ND

I just returned from Museum Store Association's annual meeting and expo in Washington DC.  It was the first time Dunitz & Company has attended and I have several colleagues to thank for that. For years I have interacted (and sold to) museum buyers at larger trade shows such as NY Now.  In recent times, both customers and vendor colleagues told me it was time to participate in MSA Forward. Those encouraging my attendance include Ione Saroyan (New York Historical Society), Stuart Hata (Fine Arts Museums of San Francisco), Debra Reiff (Origin Jewelry) and Susan Davis (Grandmother's Buttons.) If it wasn't for these friends, I might not have jumped on the bandwagon. 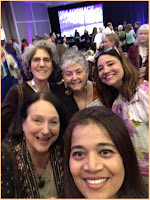 What's different about seeing museum buyers (and vendor colleagues) at a MSA conference?  One word. OK, two. "The Atmosphere."  At larger gift shows, everyone is in total business mode.  At the MSA conference, we were as well. But there was also a sense of family, camaraderie, community and supportive-ness you don't typically sense in other business settings. Seriously. Have you ever seen buyers and vendors taking Ellen DeGeneres type selfies together at a gift show? 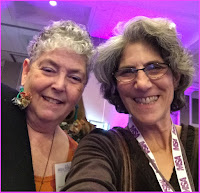 My adventures with the MSA Conference started with Terry Tarnow (Dennos Museum Center) inviting me to be her roommate at the Renaissance. Terry and I have worked together several times before. We had never before broken bread. Our glue? We both were raised in Detroit and had previously discovered people and places we love in common.  Now I can say Terry is a true friend and an easy roommate. We've even discussed returning to Washington DC (without a conference) to focus on the many museums and their gift shops. 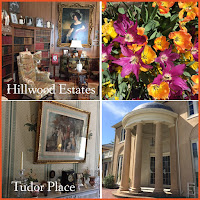 Ari Lowenstein (Vendor Member Advisor) gave me some terrific advice before attending MSA Forward. And, I'm sharing it here with you.  He said if you are taking the time to participate in this conference, make sure to join in on the educational tours and seminars. Make a point of meeting other attendees. This was sage advice.  I along with a bus-full of others enjoyed a tour to Hillwood Estates and Tudor Place and their gift shops! Whenever I could, I introduced myself to those I didn't know.  I attended seminars when I could. At luncheons I consciously sat with people I didn't know.  I joined the Western Chapter for their group pizza dinner.  Sometimes it's tough to mingle with people you're not acquainted with. It may seem awkward. Do your best and try it, always with a smile.  (Turns out many of those people I met stopped by my expo booth. And some wrote orders. I'm certain had I not dined with them, this might not have happened.) 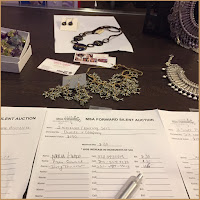 On Saturday night, MSA staged their Gala. There was a fabulous band. Many of us danced for hours. (I can't think of the last time I danced so much. That was sooooo much fun.) Staged concurrently with the party was a Silent Auction with a host of terrific products donated by vendors and museum gift shops. The goal; to raise lots of money for scholarships for deserving buyers to attend future conferences. Dunitz & Company donated two necklace/earring sets.  One, beaded. The other, fused glass. I wanted anyone seeing our donation to know that Dunitz & Company wholesales two very different fair trade collections.  I was nervous that no one would bid on our donation. I was thrilled to see by the end of the evening a bidding war had ensued.  The winner, Ryan Oswald (Vizcaya) had bid three times to make sure his wife would be wearing our pretties. Now that put a big smile on my face.

I was one of the lucky ones. I was able to set up my booth starting Friday morning, and not after dinner as many others.  Even with using most of Friday for creating my attractive display (which I absentmindedly forgot to photograph), I was able to attend a couple of seminars.  I really had no idea what to expect when I attended Neal Cohen and Jeremy Richardson's session "Year in Review, Your Annual Business Check Up."  These guys are smart and they're very savvy when it comes to issues of product safety, copyright and trademarks.  Some of these very BIG issues can actually have impact on small businesses like ours. My view? Even if most of what is said doesn't apply to you, if you take away one valuable point at a seminar, it was worth being there. I am better off for having attended their presentation.

And finally! Yes, the main clincher for why I attended MSA Forward.  I wanted Dunitz & Company to be seen at the Expo.  As my colleagues had promised, the Expo was a terrific way to get our jewelry in front of the faces of many museum buyers I'd never previously met. And do you remember my mentioning all those people I nervously sat with at lunches?  Several came by my booth. Some ordered. Many left their business cards for follow up. (Next blog post will be about the new Laser Cut collection we launched at MSA Forward. Earrings that can be customized for any type of institution or exhibition. Butterfly teaser photo here!)  And yes, I did see several buyers I already knew, which accounted for reorders. Yeah!

Other feedback from me? Order the lights for your booth. I was told that the ballroom and exhibition spaces were well lit and extra lighting was not needed. My booth was dark. Thankfully most everyone's booth was dark. With a small show and a captive audience, it seemed most buyers looked everywhere. My gut is if I'd had a few spotlights, my booth would have garnered a few more pauses.

The jury is no longer out.  Attending MSA Forward 2018 was a success for so many reasons. I enjoyed DC. I made new friends. I wrote business and I was able to pitch our fair trade jewelry line to those who didn't previously know Dunitz & Company.  And guess what? Next year MSA will be hosting it's annual event in San Diego. (And may the hotel there have food as edible/delicious as the Renaissance Downtown DC.) I can even drive to San Diego!  Will you attend? - ND