An (almost) All Black Golden Globes

Somehow the word got out that everyone should wear black in solidarity at the Golden Globes yesterday. This dress code was planned in support of #metoo and the denouncement of sexual harassment. Black is often the color worn to funerals.  It's also a fashion standard that tends to be flattering on just about everyone. With a few exceptions, just about everyone in attendance wore black clothing. And the fashion choices the actresses made were quite interesting.

Assuming the choice to wear black was a way to express disdain for sexual misconduct, one actress, Claire Foy stood out as the "best dressed" winner. She looked stunning in a well-tailored Stella McCartney suit. She appeared classy and strong. Exactly what I would expect from a request to wear black for an appropriate statement in support of the #TimesUp movement.

As at most awards shows, the actresses looked stunning. And in most cases, this years Golden Globes was no exception. By getting the word out to wear black, the actresses and their stylists made a mission of finding the sexiest black dresses ever.  Seriously? Does wearing a lacy number cut to the navel speak to our disdain for men taking advantage of women in inappropriate ways? Some actresses including Halle Barry, Catherine Zeta-Jones and Kate Hudson looked to be wearing extravagant nighties. Others wore gowns with slits open to their privates. It just seemed to me that most actresses missed the point of wearing black. 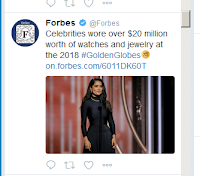 Forbes reported that celebrities wore over $20 million worth of gems and watches at the Golden Globes.  I'm thinking it must have been more than that. Yes, many actresses donned some very large emerald jewels. And there were gobs of diamonds on the red carpet too. If you chose to wear black, to fit in and not rock the boat...yes, glam up with some big glitzy rocks! (I sort of like that Blanca Blanco and Barbara Meier danced to their own drummer. No hypocrisy there.) 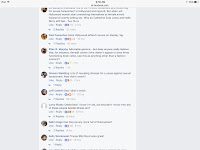 I don't think I am alone in feeling the choice for Golden Globe attendees to wear black (and loads of precious gems) was a miss.  Well, perhaps it is a win because today...just about everyone is talking about it.  This morning on my Facebook feed, I saw hundreds of real world people piping in. My friend's posts about this topic are tailed with comments. Los Angeles Times and New York Times posts are also followed with a string of responses. 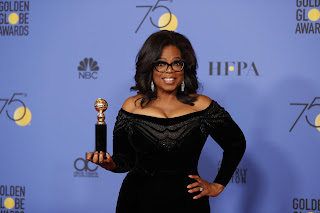 One thing is for certain. As much as so many commented on the success or fail of the sea of black gowns, Oprah Winfrey was a fan favorite.  Even in her sexy velvet number. Her speech after being honored with the Cecil B. Demille award was an inspiration and spoke to the #metoo movement with poise and perfection. If you didn't hear it or see a transcript, read it here.

So, what do you think about Oprah running for POTUS on the next go-around?  And how did you feel about the (almost) All Black 2018 Golden Globe Awards? -ND
Posted by Nancy D. at 2:54 PM