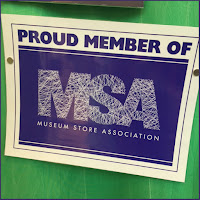 I recently applied for membership to the Museum Store Association. And thankfully my application was approved. In all honestly, various members have been encouraging me to join this group for a very long time. Most recently and obviously persuasive was Ione from New York Historical Society. Dunitz & Company has always worked with and placed our fair trade jewelry in many museum gift shops. I'm now in an even better situation to mingle with and exchange information with a host of buyers I may not have met at the trade shows we attend.

Becoming a member of this group brought back a host of museum memories for me. For this blog, I thought it would be fun to share some of them. Now you'll know even a little bit more about me. I attended West Bloomfield (Michigan) High School. My senior year, I was one of 4 students chosen to participate in an educational program at Cranbrook Institute of Science.  Evidently Matt, Harold, Mark & I were the smart and nice kids chosen to "teach" sixth graders that were bused to the museum for introductory classes on a host of topics. My expertise became microscopes and introductory astronomy. Honestly the funniest memory for me is that I was paired up with Mark to teach the astronomy class. (Shall we talk about Alpha Centauri? No.) Nearly a year before this, Mark who lived in my residential neighborhood had asked me out on a date, to a school dance. I had already been on dates, so I remember thinking at the time how odd it was when his older sister chaperoned us. It was an awkward evening. What turned out to be even more awkward was that even though we only lived a few houses apart, we didn't speak again until we were paired for teaching this class.  Now THAT was awkward for two gawky kids. Thankfully we resolved the situation quickly and successfully taught together that semester. Guess what? Mark is now a 'facebook friend'!

I graduated from the University of Michigan and majored in History of Art. Truthfully, I always dreamed of attending Art School. My parents however didn't think that was a practical move and for me that was not an option. Instead, I spent my college years studying other people's art. One wonderful memory I have from my college days was being part of the first docent class at the University of Michigan Museum of Art. (The photo posted here is of the museum I remember. This building remains today. However, it is attached to a spectacular contemporary addition.) Our docent training took place over two semesters my junior year. Most of the class was comprised of women living in Ann Arbor who after training intended to volunteer at the museum for many more years. As an experiment,  three students were selected to be part of this program, Jonathan Kuhn (who is now the Director of Art & Antiquities for the city of New York), Barb Parker-Bell (now a professor at Marywood University) and me. Our instructor was a PhD candidate, Vicky Clark who later, and for years was affiliated with Carnegie Mellon. Our obligation after training was to provide docent tours throughout our senior year of college.

I don't remember my schedule exactly. Sometimes on the weekend, I would tour a group from the general public.  And more often, we took school kids who were bused from surrounding areas for a tour of the museum. If you asked them how a Helen Frankenthaler painting made them feel, they were without inhibitions. Or if you asked children how Esther (Esther before Ahasuerus by Guercino) felt in this prized painting, they were happy to share their thoughts. The kids were always the most fun. 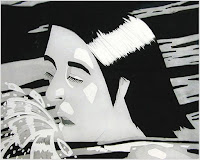 For the most part, our tours were planned. We knew which pieces in the museum required a mandatory stop. A little leeway sometimes allowed us to squash in a piece not on our regular list.  A grey-scale print of the Swimmer by Alex Katz was one I typically added to my tours. I learned of Katz when I was a docent. And his images had never been included in my coursework. To this day, Alex Katz is probably my favorite living artist (other than my niece, Helen Gotlib!)

The summer after docent training, I had applied for internships at several museums. It was crazy but I was offered positions everywhere I applied. How was I going to decide between the Detroit Institute of Arts, Brooklyn Museum of Art, Whitney Museum of American Art or the Guggenheim? The choice was not easy, but it had to be made.  First, it was a given that I should leave home and experience the Big Apple.  I would have been volunteering my time to help out a curator at the Brooklyn Museum or the Whitney. The Whitney had always been one of my all-time favorite places. The clincher was the Guggenheim had a very specific internship program where they hired many students. At the time, I didn't know anyone in New York. It seemed a good idea to choose a job where I would have a built-in social life as well. I was selected to work in the business office of the museum. This was probably best suited for me since I had decided I wanted to somehow combine arts with business for my career. Truthfully, I didn't want to make a career out of studying other people's art. 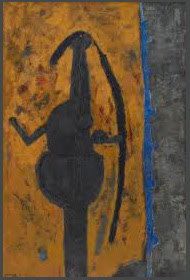 And my other responsibility that summer....was being a docent at the Guggenheim. They knew I had experience. So, again, I was one of three interns chosen to study and then tour the general public on their then Rufino Tamayo retrospective. And those were some big crowds. Sometimes those tours seemed to attract 50, 60 or more people. Seriously it felt like 100! I must say, I've always been fearful speaking in front of crowds. And I'm not sure this experience helped me get over it.

My funniest memory was on what probably seemed like one of my largest crowds. Why? Because my mother traveled for a visit from Michigan to join in. At the end of the tour, my mom shouted out from the back of the crowd, "Young lady, that was an awesome tour!" And everyone clapped and seemed to agree. My reply - "Don't listen to her, that's my mother!" What a roar in the audience that created. I smile now just thinking about that.  (For years after this tour, my mom always remembered that Tamayo frequently painted small heads with bodies proportionally too large).

So, now I'm an official part of a museum gang again! I very much look forward to working more closely with many more museums. Do you have a favorite museum memory? -ND